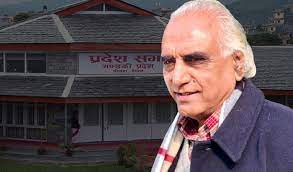 During the meeting held at the office of the Chief Minister on Monday, Chief Minister Pokharel expressed belief that the WB would partner for ending Gandaki Province's poverty, unemployment and inequality.

CM Pokharel recalled the support being provided by the WB in Nepal's development and thanked the WB for its contribution in development of Gandaki Province.

Saying the size of the economy of the province is small, he added that it contributes only eight percent in country's gross domestic product. The mobilization of revenue is in between Rs 2 billion to Rs 3 billion and resource mobilization is low as economic activities is less in the province, shared CM Pokharel.

He shared that the COVID-19 pandemic has adversely affected the economic and social situation when the province was moving ahead determining its vision, goals and priorities despite of limited means and resources and various challenges.

Pointing out that a roboust and modern transport network would pave the way towards prosperity, the Chief Minister said there was no direct road connectivity from the provincial capital, Pokhara, to Nawalpur, one of the districts of Gandaki province, and one had to travel through Bagmati or Lumbini province to reach there.

He said the mountainous districts in the province lacked reliable and effective road connectivity and urged the World Bank's cooperation in developing an effective road network in the province. Stating that the face of the province itself would be changed if the road connecting Korala transit in Mustang to Tribeni via Pokhara, Bhimad and Jhyalbas could be developed into a two-lane dedicated highway, he believed that this road would be the 'prosperity road' of Gandaki province.

The World Bank country director said that the WB will always come forward for strengthening federalism in Nepal. Stating that they have been providing support placing connectivity in priority, he said the WB was willing to invest in branding and marketing of organic products produced in the mountainous districts including Mustang.

Representatives of WB and the Asian Development Bank, Chief Secretary of the Province Government Dr Damodar Regmi, Province Policy and Planning Commission vice-chair Dr Raghuraj Kafle, and political advisor to the Chief Minister, Khadga Bahadur Kamal, among the officials were present in the meeting.

We should be conscious for implementing constitution: CPN (UML) Chair Oli

Constitution has fused together martyrs' dream, citizen's aspiration and our future - PM Deuba

Over 1.8 million people get full dose of vaccine against COVID-19 in Bagmati province