Constitution has fused together martyrs' dream, citizen's aspiration and our future - PM Deuba 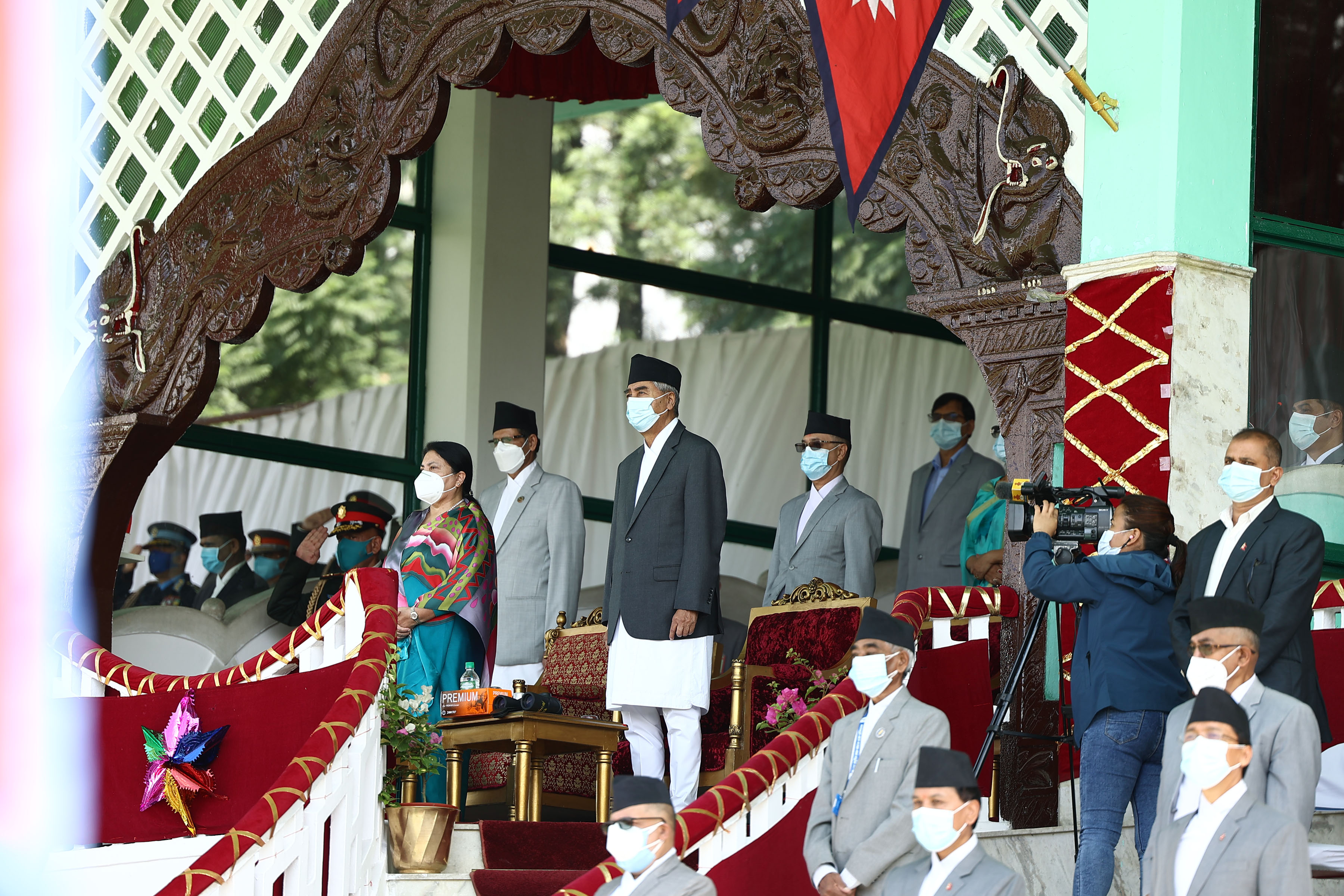 Kathmandu: Prime Minister Sher Bahadur Deuba has said that the Constitution of Nepal has united the dream of the immortal martyrs, aspirations of the citizens and our future.
He said so while addressing the special programme organized at the Army Pavilion, Tundikhel by the Seventh Constitution Day Main Celebration Committee today.

"It is the government's goal to bring prosperity to the nation and lasting happiness in the faces of the citizens through the successful implementation of the constitution," the PM said.
Noting that this unprecedented political change had become possible through the decades of people's movements for civic freedom and nation's prosperity, the armed rebellion as well as the Madhesh movement, PM Deuba, who is also the Chair of the Main Celebration Committee, said the present constitution was made by the Constituent Assembly formed of people-elected representatives in order to institutionalize the achievements as the federal, democratic republic, inclusion, human rights and the personal freedom, and this constitution has entered the seventh year of its promulgation.

Paying tribute to all the known and unknown martyrs who laid down their valuable lives for the forward-looking change in the country, he on the occasion remembered as well as showed high regards to all those citizens who suffered physical, economic and psychological suffering and those made to disappear in the struggle for change.
Similarly, the PM has paid high respect to the seniors who provided leadership remaining in the forefront in course of the seven decades long political movement and to all those Nepali citizens advocating total change.

"The supremacy of the constitution and the constitution that institutionalizes it are inalienable components of the rule of law. Therefore, the Constitution Day is a special day of national happiness. We have not been able to celebrate this national festival with open heart and maximum participation because of the COVID-19 pandemic. We are compelled to celebrate such festive occasions remaining safe from the pandemic," Prime Minister Deuba said.
Stating that the human race has been suffering from the global pandemic of COVID-19, the most horrendous disease of the century, PM Deuba said the government is fully committed and active in saving the Nepalis citizens from this pandemic.

The government’s first priority is to save citizens from ongoing COVID-19, said the PM. “One third population of the country will get vaccinated against the infection within the Nepali month of Asoj and all will be administered COVID-19 vaccines within this year.”
Stating that the government is committed to safeguard the constitution achieved through long struggles and sacrifices of the people, he claimed that aspirations of the people for political changes have been institutionalized through the constitutional document.

He offered his commitments to realize the objectives of the constitution for sustainable peace, good governance and development and prosperity, the basis for the federal democratic republic governance system. Different state agencies remained of the handover would be handed over to the province and local levels, he said. Likewise, resources and workforces would be proportionally distributed and necessary laws would be made for the full implementation of the constitution.
The government has accorded first priority to build a just, discrimination-free, strong and prosperous country through the federal governance system while committing to socialism based on national welfare, social and economic justice and democratic norms and values and developing the culture of coalition through mutual talks, consensus and cooperation, he said.

He also pledged to realize aspirations, wishes and hopes of citizens and address their dissatisfactions through a democratic means and to sovereignty and territorial integrity of the country, good governance and impartial press freedom and save lives and properties of people.
He expressed his best wishes that may this Day provide power and inspirations to all Nepalis to help make country’s economy dynamic while following the health protocols and saving lives of citizens from the virus. Present on the occasion were President Bidya Devi Bhandari, Chief Justice Cholendra Shamsher Rana, Speaker of the House of Representatives Agni Prasad Sapkota, Chairperson of the National Assembly Ganesh Prasad Timilsina, ministers, representatives from diplomatic missions, special-class government employees and chiefs of security agencies. RSS

SC switches to lottery system to assign benches for hearings