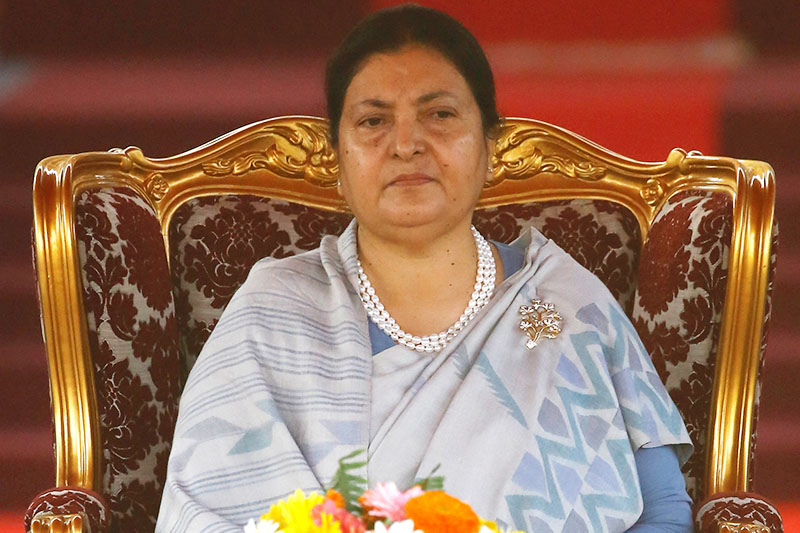 Kathmandu: President Bidya Devi Bhandari said that we all were responsible to usher our country in the path of progress, which was built due to the sacrifice of our brave ancestors.

Extending best wishes to all Nepalis sisters and brothers at home and abroad on the National Unity Day, Bhandari expressed her confidence that the day would encourage us all to fulfill the national aspiration of the 'Prosperous Nepal, Happy Nepali' as well as to keep the national sovereignty, national unity intact.

The National Unity Day is observed in honour of late King Shah who unified various principalities and founded modern Nepal some 250 years ago.

She asserted that Nepal always remained a sovereign country due to the glorious contribution of the patriotic forefathers. The Head of the State said that the history had it that the then king of Gorkha, Prithivi Narayan Shah, had contributed hugely in unifying the country geographically and emotionally.

Furthermore, President Bhandari viewed that the purpose of the unification bid was to build a strong country with independent economy by exploiting the natural resources and heritages here.

According to her, the unification bid of Nepal had laid a basis to forge stronger national unity by conserving unique cultures, languages and traditions of the country. "The insightful suggestions and messages given by Prithivi Narayan Shah surrounding social, economical and foreign policies are still relevant."

She said that we could ensure socio-economic transformation of the country if we move ahead acknowledging and applying the suggestions offered by far-sighted Prithivi Narayan Shah, the major actor of the unification bid.